Paris shows its beauty at every corner including in its Métro. The interior design of the Paris Métro is not to be missed. While discovering Paris on foot, you may end your enchanting day trip by entering any of the following culturally-rich stations, appreciating the stunning design, then hopping onto a train back home. As each design celebrates a particular theme, you may match it with your mood or with your day trip theme.

The Assemblée Nationale station is located near French National Assembly. It features silhouettes of deputies in its 90-meter long colorful murals, developed by Jean-Charles Blais.

The Concorde station is tiled in the text of the Declaration of the Rights of Man and the Citizen. The scheme was designed by Françoise Schein. 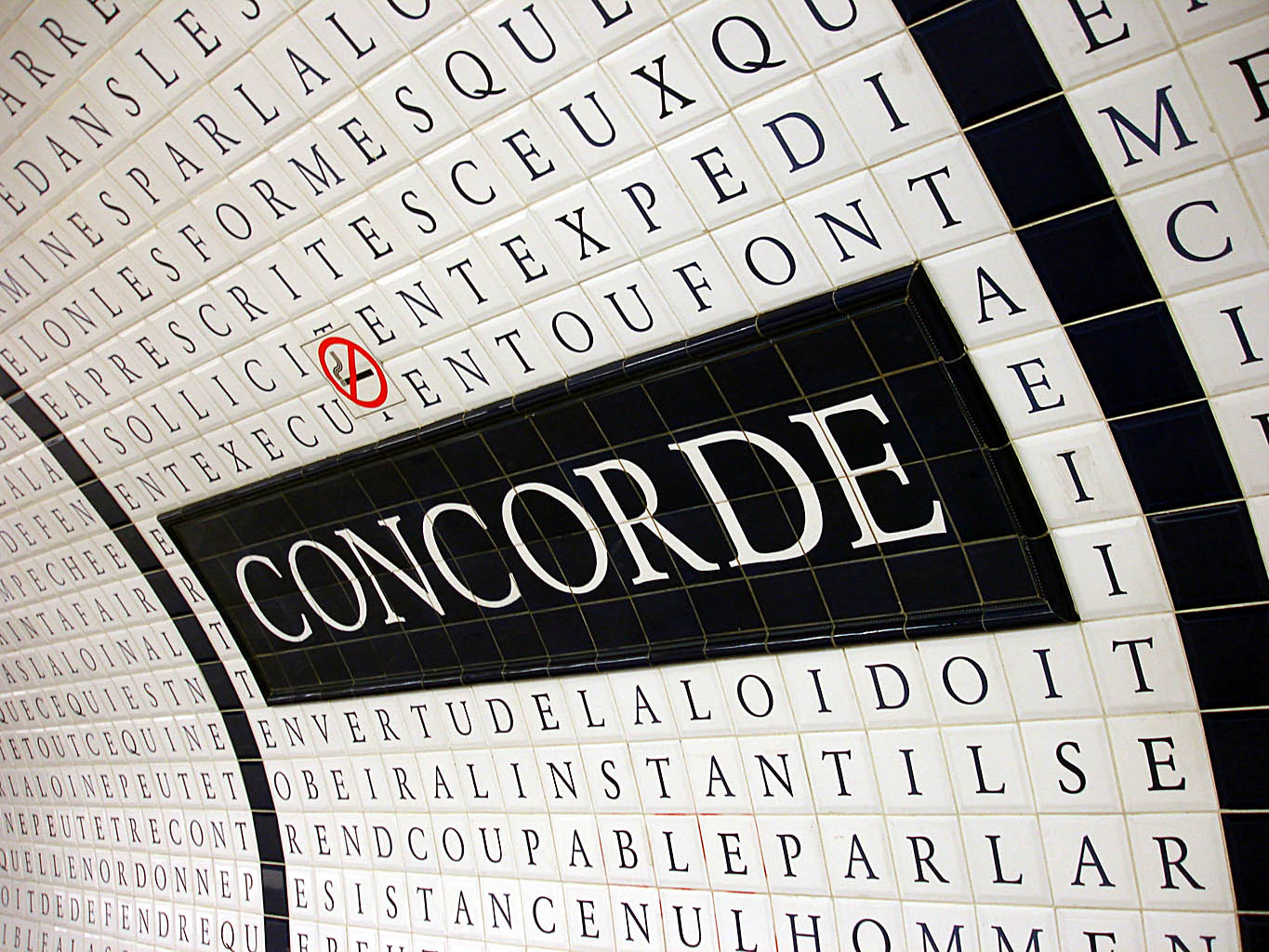 The Bastille station features murals of scenes from the French Revolution, and archeological remains of the notorious former prison. 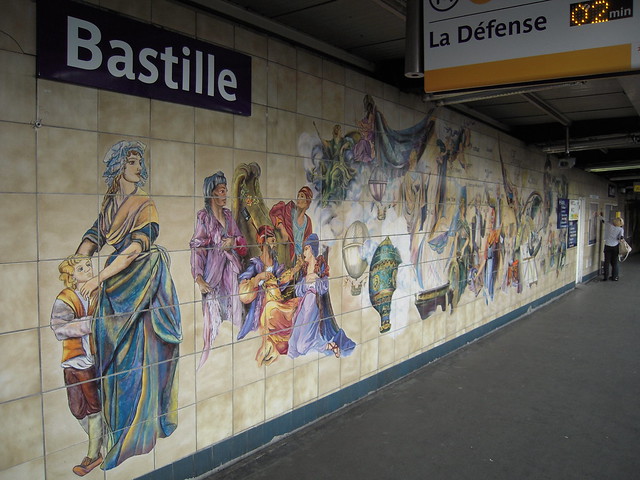 The Cluny – La Sorbonne station celebrates the writers of the Latin Quarter, with a tiled reproduction of Les Oiseaux by Jean Bazaine.

The Louvre – Rivoli station is located near Musée du Louvre. It features stonework, statues and other replica museum pieces.

“Station-louvre-rivoli” by Pline – Own work. Licensed under CC BY-SA 3.0 via Commons.

The Cité station lies underneath the Île de la Cité. The soft light from the low-hanging globes of the art nouveau street lamps bounces off the polished tiled ceiling and slick floor to great effect. 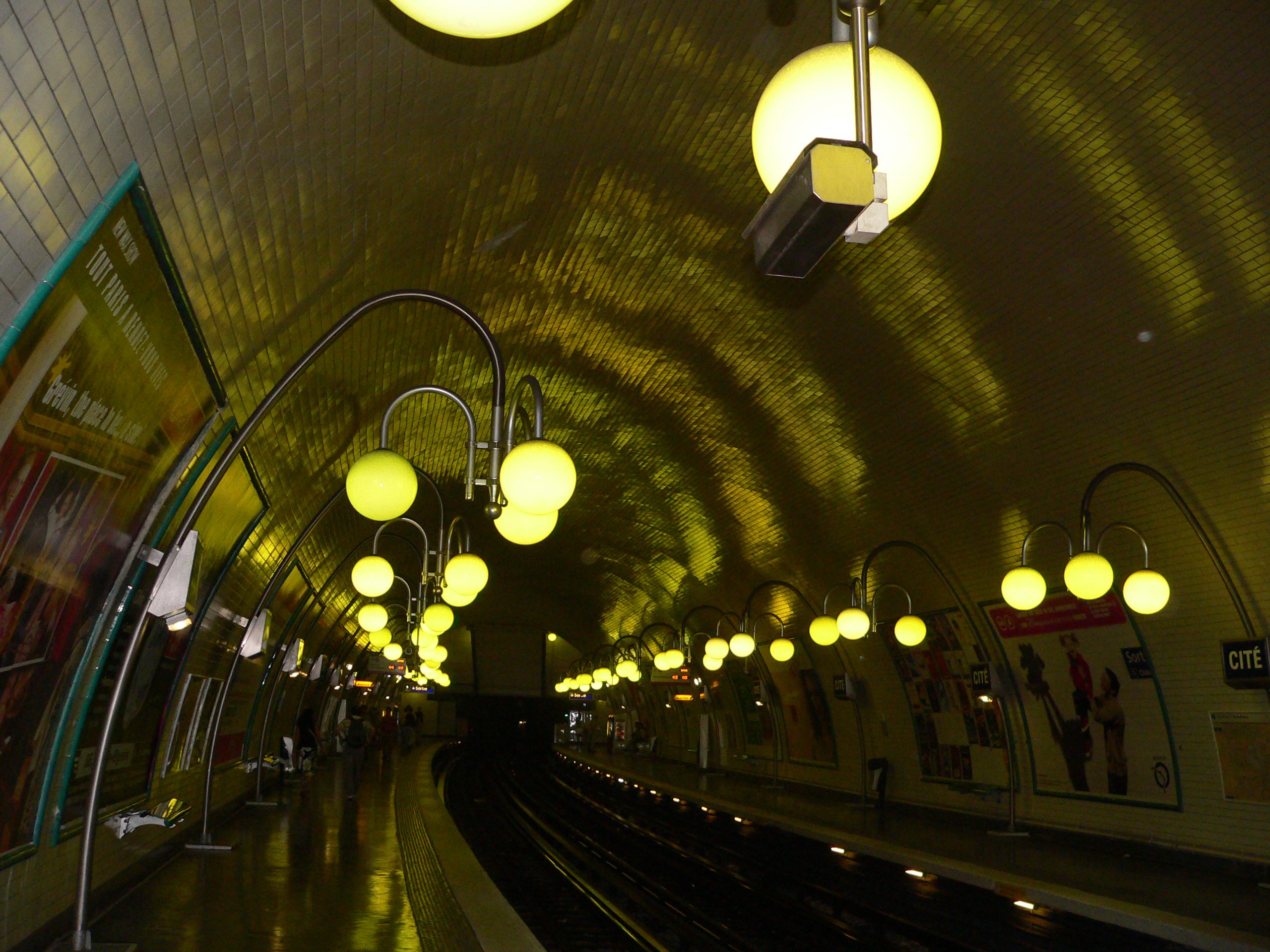 “Metro-staionCIte-p1000475” by Rama – Own work. Licensed under CeCILL via Commons.

The Arts et Métiers station is named after the school and museum of the same name. It features a Jules-Verne-like interior of a submarine and was designed by comic-book author François Schuiten. 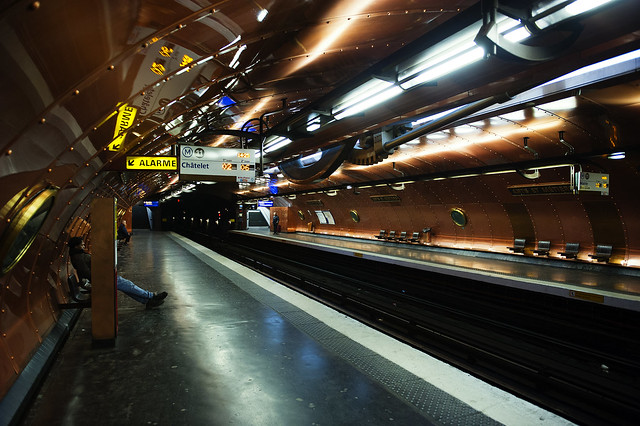 The Pont Neuf station is located near Monnaie de Paris (Paris mint). It features sculptures of oversized coins “dropping” from the ceiling and walls.

The Cadet station is named after Rue Cadet, itself named after M. Cadet de Chambine, owner of much of the land through which the street passes. It is tiled in the stars and stripes of the American flag. Ribbons of red white and blue race from ceiling to floor.

The Chaussée d’Antin – La Fayette station was originally named Chaussée d’Antin after the street of Chaussée d’Antin—which was named after the first Duke of Antin. In 1989 La Fayette was added referring to the famous shopping street of Rue La Fayette. In 1991, Toulousian artist Jean-Paul Chambas embellished the station’s ceiling with a mural depicting the American Revolution, featuring famous Americans like Elvis and Martin Luther King, Jr.

The Franklin D. Roosevelt station is named after Franklin D. Roosevelt Avenue, in honor of the American president who was an ally of France during World War II. It was remodeled with gold anodized plates and a vivid yellow and black colour scheme, topped off with hole-punched metal chandeliers. 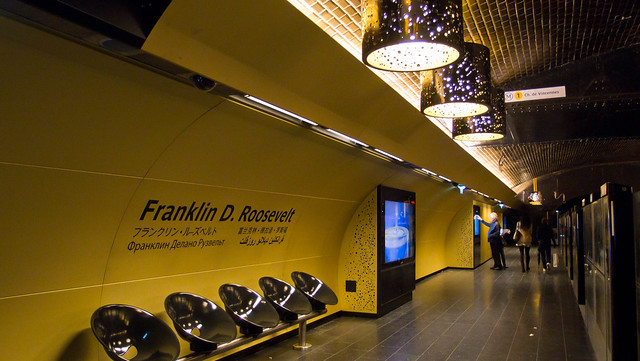 It introduced an artistic technique known as “gemmail”, a type of stained glass art developed during the 1930s by French painter Jean Crotti. 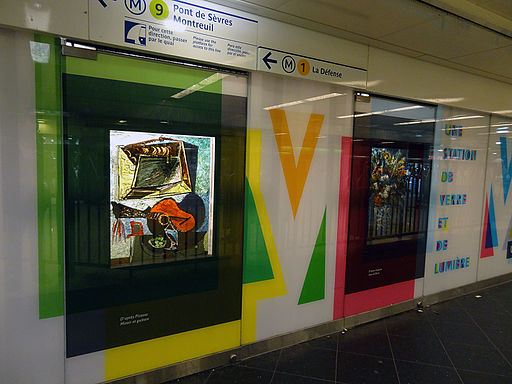 The Parmentier station is named after the 18th-century French scientist Antoine-Augustin Parmentier who promoted the use of potato as a food source at the end of the 18th century. It features green trellises along the walls, tractor seats for benches, and exhibits about the potato.

The Tuileries station is located underneath Rue de Rivoli near the Jardin des Tuileries, for which the station is named. Its artwork represents many examples of 20th century history and culture. 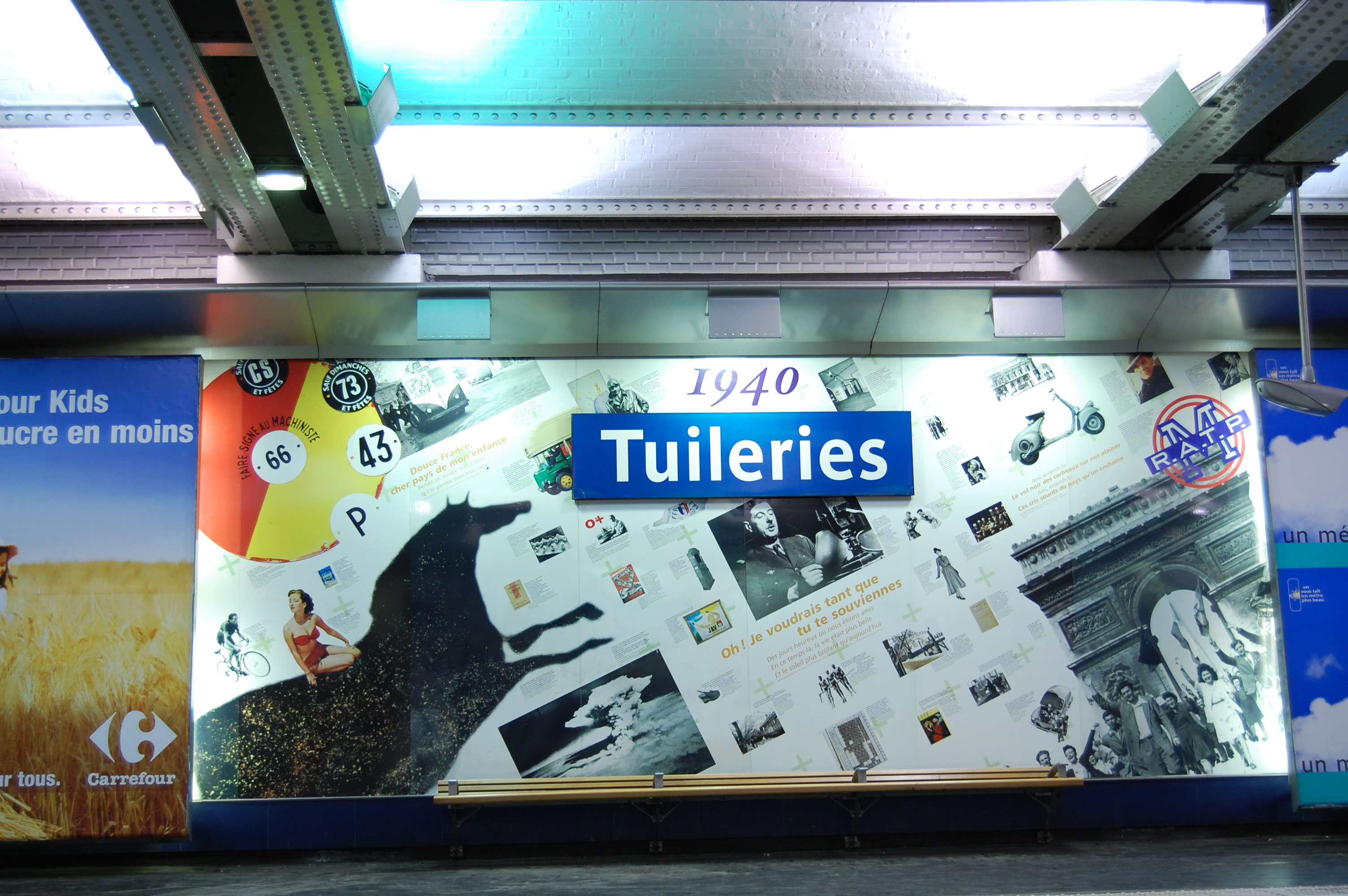 “Station Tuileries” by Pline – Own work. Licensed under CC BY-SA 3.0 via Commons. 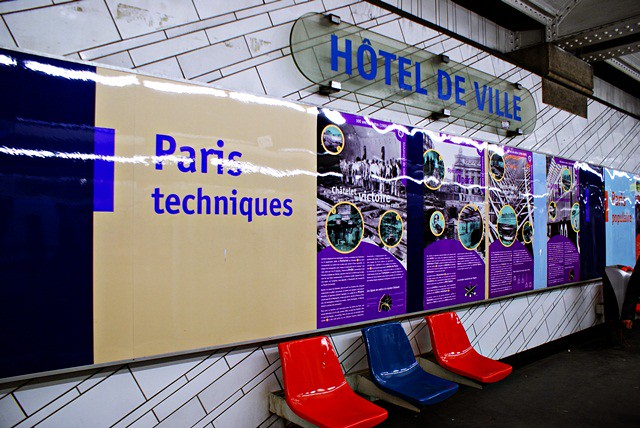 The Villejuif — Léo Lagrange station is named after Léo Lagrange, a French socialist politician and under-secretary of state for sport. The station is decorated with sporting exhibits. 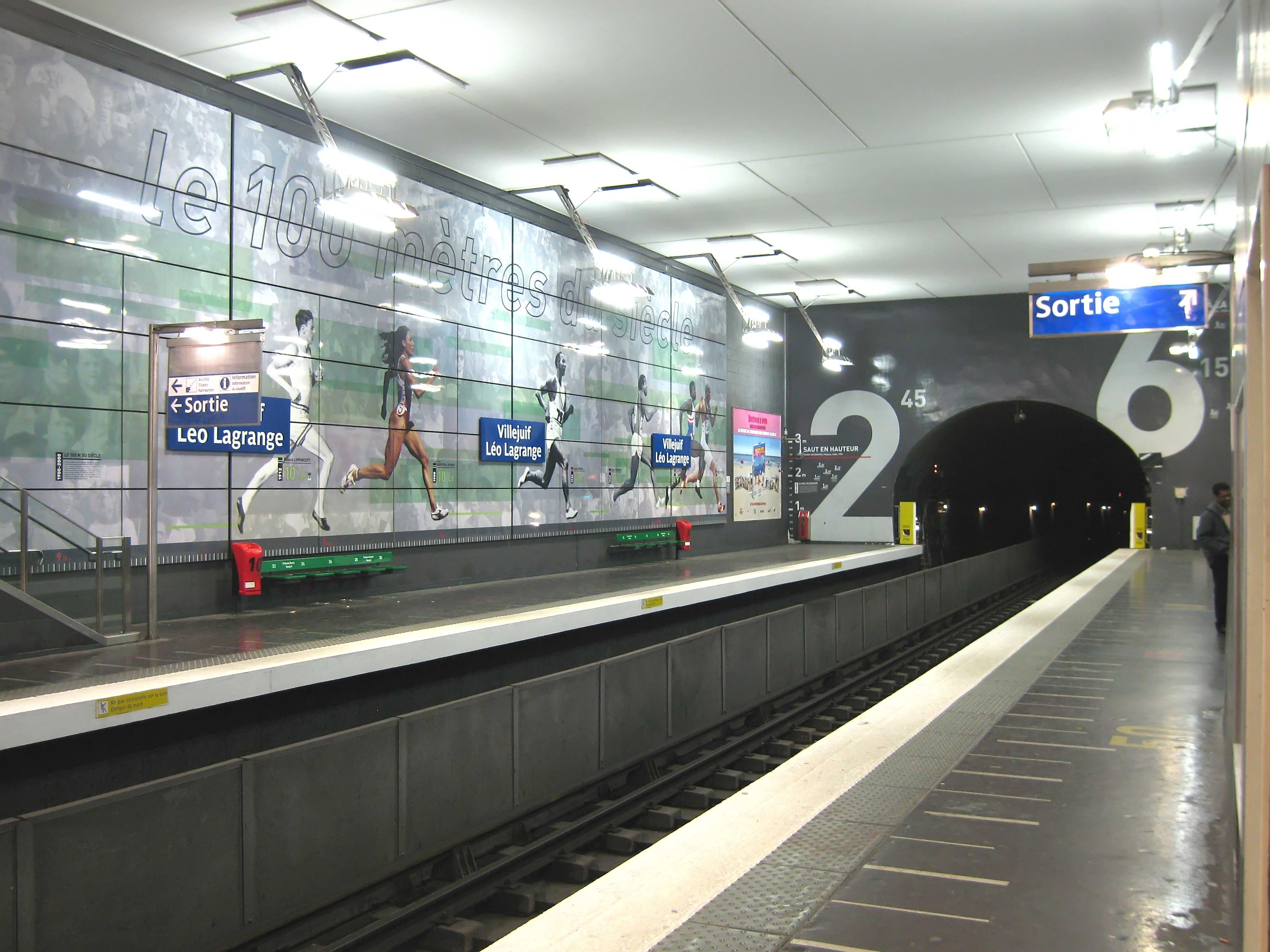 “Ligne-7-Ville-juif-Leo-Lagr” by Pline – Own work. Licensed under CC BY-SA 3.0 via Commons. 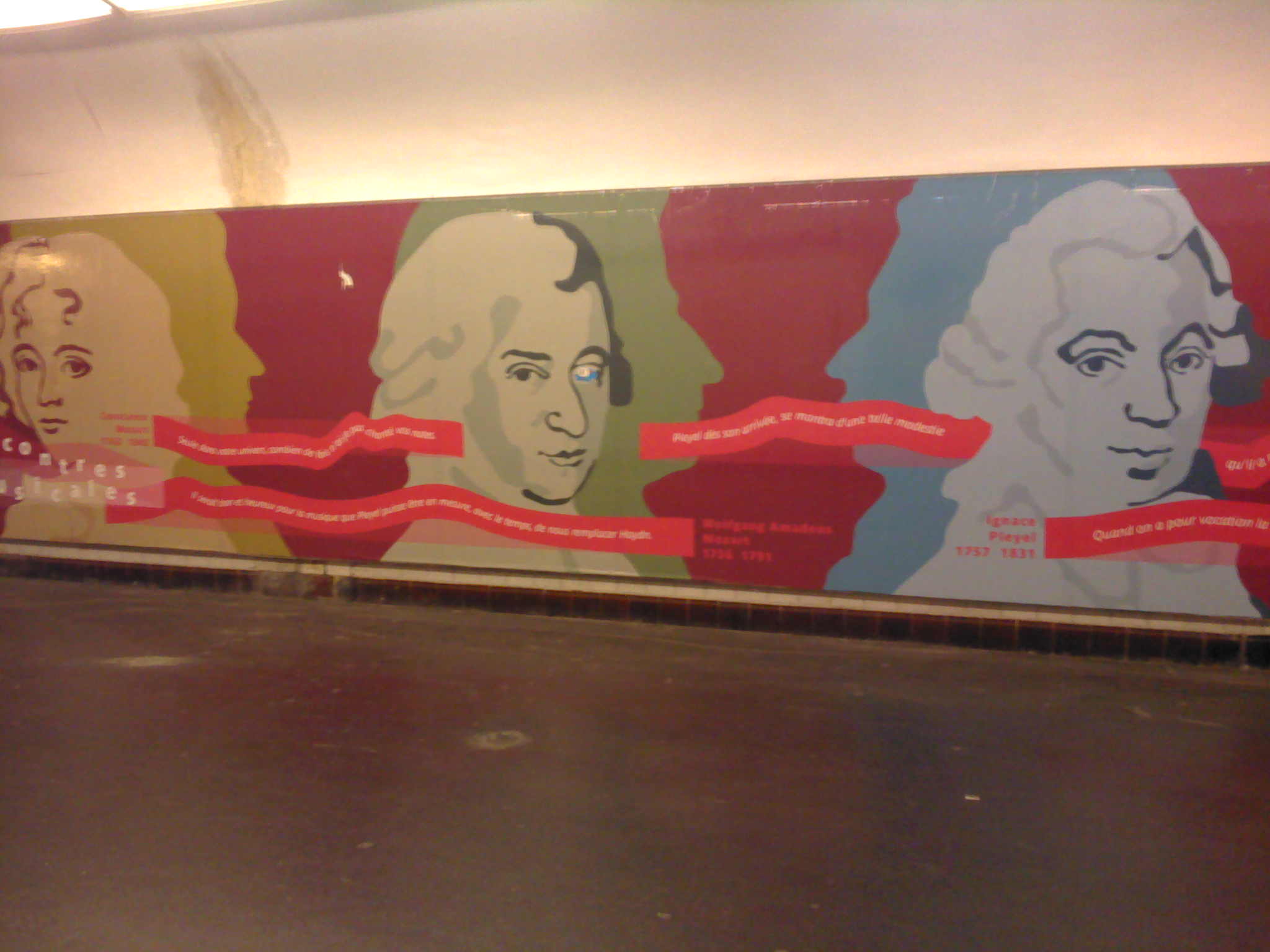 Every inch of Paris is beautiful, whether you are on foot or on the Métro. The city of Paris is one vast and versatile cultural museum. With a Métro pass and your feet, you’re immersed in an artistic and inspiring city that keeps you awake, excited and enlightened. Subway stations are no longer uniform and taking the Métro in Paris becomes a source of enjoyment rather than a boring chore. You come to realize that Paris is not only about the Eiffel Tower and a few obvious attractions. The city itself is one big attraction and the only way to experience it to the full is to move there.